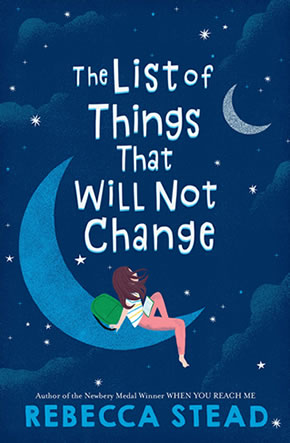 After her parents’ divorce, Bea’s life changed in lots of ways. But she can always look at the list she keeps in her green notebook to remember the things that will stay the same.

When Dad tells Bea that he and his boyfriend, Jesse, are getting married, she’s happy. Bea loves Jesse, and when he and Dad get married, she’ll finally (finally!) have what she’s always wanted–a sister. Even though she’s never met Jesse’s daughter Sonia, Bea is sure that they’ll be “just like sisters anywhere.”

As the wedding day approaches, Bea learns that making a new family brings questions, surprises, and joy, and readers will discover why the New York Times called Rebecca Stead a “writer of great feeling.”

★ “The angst and worries that middle-grade readers experience are brought to life through Bea’s authentic voice in this must-read title.”
–School Library Journal, Starred Review

★ “The strength of this novel lies in Stead’s authentic, respectful, low-key approach to the emotional life of a ten-year-old.”
-The Horn Book, Starred Review

★ “Ultimately, Bea survives, thrives, and grows… Readers negotiating their own changin lives will relate to her challenge and applaud her triumph.”
-The Bulletin, Starred Review

★ “Stead masterfully explores the internal lifeof a girl… in a way that tells readers they are not alone in their complicated, contradictory feelings about the world.”
-Shelf Awareness, Starred Review